Question from Kaylen - Topic for EPQ

Hi im 17 and currently doing my EPQ. I would really like to do something regarding the tudors or more specifically Henry VIII wives but i cant think of a question. Any suggestions?
Posted by Lara at 3:39 PM No comments:

Is it possible anyone could tell me any further information regarding the image below?

The miniature has been published online as a miniature portrait of Katherine Parr however there doesn't appear to be any further information regarding where the image came from, its current owner, and how it got its identification?

I have searched the Heinz archive in London with no luck and would appreciate any assistance with this.

Catherine of Valois second husband was Owen Tudor to whom I have traced my ancestry. They had a number of children the two prominent ones being Jasper, Duke of Bedford and Edmund, 1st Earl of Richmond, the father of Henry VII. After Catherine of Valois died Owen Tudor (English version of his name) had a child with an unknown woman who became known as Sir David Fychan Tudor. He was recognized by his half brothers, Edmund and Jasper and was the Uncle of Henry VII. What role did Sir David play if any at the court of Henry VII. How is Sir David Owen Tudors lineage recognized, if at all, in relation to the royals as a half brother? What would my relationship if any to the Tudors be?
Posted by Lara at 1:24 PM No comments:

Is there a record of the Royal Chaplains appointed by QE I?
Posted by Lara at 12:07 PM 2 comments:

Question from Richard - Pilgrimage of Grace in Cumbria

I am doing research for our local History group in Renwick, Cumbria, on the Pilgrimage of Grace in Cumbria. I am thinking about why the POG in Cumbria did not attract as much aristocratic or senior cleric support when compared to the uprising in York and Lincoln. I also wonder why there was a relatively low level of support for the POG even though the area is similar in many ways to Yorkshire. I speculate that enclosure had not occurred much in Cumbia and this was a spark in other areas.
Would anyone have a view on this?
Many Thanks,
Richard O'Brien
Posted by Lara at 8:07 PM No comments:

Question from Stacey - Above ground tombs

In the above ground tombs, are the coffins above ground inside the tomb or is the actual coffin under the ground?
Posted by Lara at 6:40 AM 2 comments:

Question from Arthur - Confiscation of manors

In the course of research for my novel I have come across a question that I thought someone here might be able to help with...

When a nobleman had his estates and properties confiscated by the crown after he was executed for treason, for example

1) What happened to the estates? Sometimes you see them restored later to a son or descendent suggesting that they had not been disposed of in the intervening time and 2) how did an heir get them back?

Also on the same issue. If a nobleman had gifted a manor say to one of his children, either in a Will if he knew he was going to be executed, or earlier say as a dowery or wedding gift..would they be confiscated too, even if the technically belonged to the son or son in law or something?

Lastly I very rarely read of noble families becoming destitute due to lands being confiscated..this might suggest they did not loose everything...so how did they support themselves until they could get lands back?

Sorry its a lot of questions in one but they all interlinked I think.
Posted by Lara at 1:00 PM 1 comment:

I was curious about the excommunication that the Pope carried out against Henry VIII. It is said that when a Prince is excommunicated from the Holy Church, his reign is made invalid. Is this true? & If so, was there anyone that attempted to userp the throne from Henry VIII? Thank you in Advance!
Posted by Lara at 10:30 AM 1 comment:

Question from Ally - Age to be a godparent

Mary I is recorded as having been made godmother to her cousin Frances Brandon; however, Mary was one year old when her cousin was baptized. Was there no requirement at the time that a godparent be at least 16, or was an exception made because of Mary's royal heritage?
Posted by Lara at 7:14 PM 1 comment:

I have become seriously interested in King Henry VIII and his relationships with his wives in the last year or so being confined to bedrest whilst I was pregnant. I have done quite a bit of research and haven't came across this question yet in anything I've read or listened to.

Were there any wives that Henry VIII regretted the outcome?

Also, did Lady Jane Rochford's confession on her execution day about her previous remarks upon the accusations of the incestuous relations between George and Anne ever get back to Henry and did it change Henry's thoughts towards his past relationships with his wives?
Posted by Lara at 9:00 AM 3 comments:

Question from Arthur - Wealth of an early Tudor Baron or Earl

If anyone can tell me what the most likely wealth for a baron or earl would be in this period.

I realise its variable and would depend on things like how many estates were owned and what they produced and offices held personally.

I am working the idea that they would have maybe 20-30 manors in various places and maybe a castle or two. Is this too many or two few for those kind of ranks?

I don't want my family to be exceptionally wealthy, like just have enough income to maintain themselves as people of their status should, but not be like super rich...

Is there any resources anywhere that show the income for one manor estate for a year for example which I could probably multiply 20-30 times to get a round about figure. The actual amount wont really known but I just want to a rough idea to be able to make comparisons.

Question from Peter - Age to make a will in Tudor England

Please could you advise what the earliest age is a person could make a Will in Tudor England?
Posted by Lara at 9:46 AM 1 comment:

At school I have this question about Earl of Essex Rebellion is a interpretation and i must to write how convincing is ... So the interpretation is like this : "When Elizabeth refused to renew [Essexs] patent (monopoly) of sweet wines.his credit structure collapsed. She had effectively condemned him to a life of poverty.Yet Essexs motivation went beyond this. A faction leader who was denied access to a monarch was an untenable positionAfter his disgrace, his urge to oust the Cecilian upstartsbecame obsessional."

When were Mary and Elizabeth declared legitimate? Is this the same as the time they were put back in the line of succession?
Posted by Lara at 9:26 PM 2 comments:

So I just found this site and wondered if I could find out more about my ancestry through others. So I was born Charles Tudor and my father and grandfather have the same first and last name. I want to dig deeper into whether I have any descendants of the royal family. Do you have any ideas about my lineage or can help with it?

[Note from Lara - we've had this question before, I think, along with some recent general genealogy questions so I thought I would open it up for people to comment with some of their favorite genealogy resources and tips.]
Posted by Lara at 7:31 PM 2 comments:

George contacted me about posting this again since it seems to still be a bit of a mystery!

Below is an illustration from a lecture I Googled about the Great House, and I guess it's of men using that facility. Several questions: Were such facilities separated by gender, as this drawing suggests? By class? Note the absence of anything -- a cloth, a sponge, even water -- to wipe their bottoms.

Can anyone comment on this as well as answer more completely my initial questions re: "toilet facilities" for large gatherings? 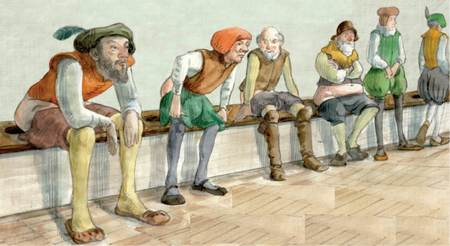 In looking through a synopsis of David Stewart's lecture at Little Waldingfield History Society re: Hampton Court, the statement below appeared. It's in line with my questions about: how toilet facilities were available and serviced for large numbers of people? Were they separated by gender and/or class? How did they clean themselves? In light of inventories, descriptions of room use, servant assignments, and so forth, one would think evidence would be available. Today, a review of event plans and budgets would show evidence of toilet facilities, supplies, and services since costs, space, and labor are needed.

Henry really used Hampton Court to impress, and in August 1546 he feasted and fêted the French ambassador and his entourage of two hundred gentlemen, along with 1,300 members of his own court, for six days!